With thanks to Andreas Hirsch.

After the 2007 Ars Electronica Festival, a linked event happens this Friday at Beijing: The International Music Council (IMC) hosts an important gathering of worldwide music representatives, like from WIPO (World Intellectual Property Organization), royalty collecting societies and artists, International Musicians’ Union, Electronic Frontier Foundation (EFF – a major civil rights defender), Creative Commons and Fair Music initiative (the first global initiative for justice and fairness in the music business). Moderator is Peter Rantasa from IMC and Fair Music. The goal of the big meeting is to work within the framework the “Musical Rights” of the IMC and find a balance for the interests involved in the musical world of the digital age, a problem acutely expressed since long ago and which got chronic by now, due to an absence of proper attention in the public discussions.

Peter Rantasa says the initiative tries to mediate discussions towards a solution for the prolonged lack of consensus between rich vs. developing countries, creators vs. consumers, in order to regulate access to and participation in musical cultures, along with a more balanced distribution of profits on each side. This way, everyone will get rights: the creator of a musical piece will get symbolic (protection of his/her intellectual property) and material recognition (fair percentage of the revenue generated by their creative works) and the consumers will have access to the world culture.

The present copyright legislations are no longer adequate to the structural changes within the music business brought on by digitization, so a new business model of a “Fair World of Music” is proposed. Still, this new framework proves to be very challenging for the royalty collecting societies, especially in Europe, where such societies in the small countries need support, due to the existing regulations on competition. But Fair Music is confident that it’s already paving the way towards a rewarding resolution.

Here are some things Fair Music stands for, besides the balance of interests: “protection of artistic freedom, well-balanced contracts for musicians, fair remuneration for composers and musicians, as well as a fair distribution of opportunities for smaller producers worldwide, and especially for musicians of the Global South.” Based on the idea and empirical knowledge of the Fair Trade Organisations, Fair Music strives to develop new standards of fairness for the music industry, along with the International Music Council (IMC) and music and cultural NGOs. Every channel of distribution will have to meet the future standards in order to receive a fair music seal of approval. This way, consumers are assured with a quality certification and a transparency concerning the place where the music was produced and marketed, under fair conditions within the given legal frameworks.

The online platform www.fairmusic.net offers both the latest information and an opportunity to join the initiative. 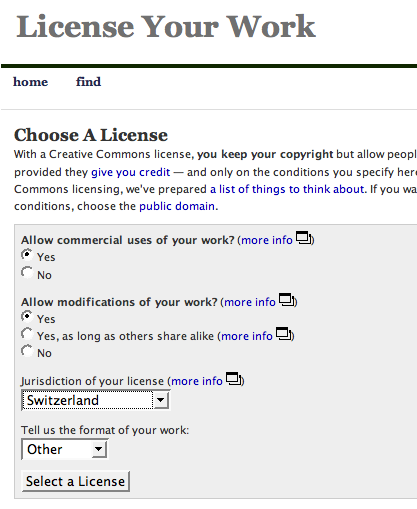 Introduction:
Sign this letter to Steve Jobs asking him to back his pledge on DRM by April 1. We will send this letter with your comments to Steve on April 1, with a big thank you because he has taken one of these actions, or a jesters hat for him to wear if he doesn’t.